ROSELAND – Opening an acrobatics school on the South Side is a dream that will soon become a reality for Englewood native Tim Shaw.

The 38-year-old has more than 25 years of experience in circus performing, and he wants to pass down his skills to inner-city youth. Students and young performers on his Chicago Boyz Acrobatics Team need more space to practice, having outgrown Robichaux Park, he said.

The new facility, at 901 E. 95th St., will allow him and his coaches to teach even more children and teens, Shaw said. He’s renting an empty 14,000-square-foot building from Trinity United Church of Christ. He signed a 10-year contract that went into effect May 15. His team is practicing in a temporary facility next door until renovations are completed by early September.

“The demand to see the Chicago Boyz Acrobatics Team has grown, but in addition to that, we feel the need for this activity has gotten bigger,” Shaw said. “We also want to give the activity its proper space so that we can have whole classes and teachers.”

Before moving into their temporary home last month, the students and team members shared gym space, and classes were combined due to the limited time allotment from the Chicago Park District.

“Having our own facility gives us the freedom and flexibility to run everything that we do professionally and to do more as we see fit,” Shaw said.

He started his partnership with the Park District 16 years ago. Before that, Shaw was an assistant coach with the Jesse White Tumblers and before that, he performed with Ringling Bros. Circus.

He got recruited by the circus in 1992 and was traveled all over the country. Coming from Englewood, it was a great experience to see other places, Shaw said.

He wanted to give other young people the same opportunities, which is why he decided to form the Chicago Boyz Acrobatics Team. The 25 members have traveled the world, performing in Qatar, Dubai, China, Mexico, Canada, Germany and other countries. Last year they performed more than 500 shows. This year they are scheduled to perform at nearly 700 shows with four groups.

“Before joining this team, most of these kids have never even left their own neighborhoods; they haven’t even been Downtown,” Shaw said. “Now they’re front and center at halftime shows at the biggest NBA games. Last year we were Game 4 entertainment for the NBA Finals for the Cleveland Cavaliers.”

Opening the acrobatics school on the South Side was a conscious decision, Shaw said.

“My passion and my heart is in serving my African-American youth,” Shaw said. “I could have easily opened a space like this a long time ago, somewhere else, outside the city, but I didn’t want to do that. I didn’t feel that was what I was called to do. I want to stay in the city so I can continue to serve my purpose. We’re not just doing acrobatic shows, we’re changing lives.”

He said he’s excited to introduce children to his circus art classes because many have never had the opportunity to try it.

“There is a lot of spirit in a lot of people, but it dies because there’s no way for that spirit to be unleashed,” Shaw said.

The classes will focus on tumbling and acrobatic techniques and circus arts. They’ll learn tricks like how to juggle, walk on a globe and ride a unicycle.

And at the larger facility, Shaw said he can grow his team. He will expand from 25 to 50 additional members. The interest has increased since they were semifinalists on “America’s Got Talent” in 2013 for Season 8.

The school will work with boys and girls as young as 3 years old. The classes are designed to teach them not only the skills for the mats but professional development skills, too. Shaw said there are plenty of opportunities in this industry for them and he wants to help equip his students with the tools to succeed. 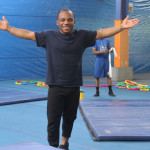 Team member Omar Dudley, 27, has been with Shaw since the beginning. Before getting recruited, Dudley was flipping on mattresses he and his friends would find in vacant apartments. He grew up in the Westhaven Apartments on the Near West Side.

Dudley met Shaw at Union Park, down the street from his home.

Since becoming a Chicago Boyz Acrobatics member, Dudley has traveled to more than 14 countries.

“Before coming to the team, I had never even been to the South Side of Chicago,” he said. “Seeing that there was a better community outside of my own community was like a dream come true at my age.”

Dudley said he never imagined that tumbling could take him places. He said his experience so far has been nothing but positive.

“It’s an amazing feeling, and I never want to give it up; I want to keep going,” he said.

All team members are salaried and get paid for their performances.