The McDonald’s Thanksgiving Day Parade was awesome. Thanks T-Mobile for being an awesome sponsor. This was an honor to be selected for the parade out of thousands of possible selections. The Chicago Boyz were a huge hit and even got footage on tv. What a great day!

While we were waiting to move the guys showed off some tumbling tricks to the crowd. 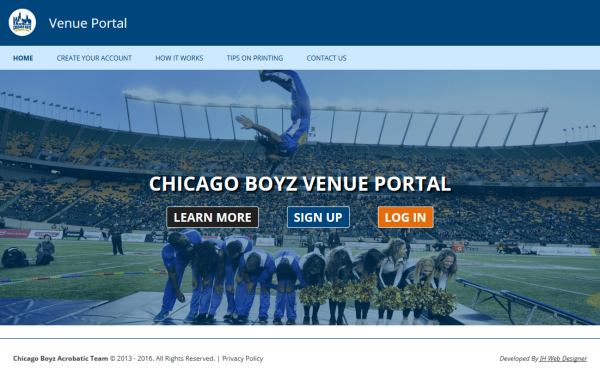 Our Venue Portal is simple to use, where its even Mobile Friendly. Just head over to our Venue Portal, sign-up your venue for a FREE account, and once your venue is approved, you’ll then have access to downloading any of our Posters or Flyers to help you promote your event you have with the Chicago Boyz.

All venues are welcome to sign-up, this includes Elementary Schools, Middle Schools, High Schools, and even Colleges.

For more information about our Venue Portal, please refer to the How It Works page.

The following article was fist published on:
The Rider News; The Student Newspaper Of The Rider Community
Article by Modjina Ovil | November 10, 2015

Family weekend featured many exciting events, including a performance by The Chicago Boyz Acrobatic Team, who performed live in the Bart Luedeke Center Theater on Nov. 7.

The group is well known for its active performances that made it a top finalist on America’s Got Talent.

“Our team got started based from my experience in circus performance.” said Coach Tim Shaw of The Chicago Boyz. “At 13 years old, I was recruited by Ringling Brothers. That experience taught me much more than just performing but about discipline, respect, character, integrity and education, and all of those components that lead to success. So I decided to take the same concept mix and start The Chicago Boyz as a way to teach them what I’ve learned as a circus performer.”

A YouTube clip from The Chicago Boyz performance on the America’s Got Talent season finale was showcased before the group began. For those who may have never seen a live acrobatic show, the clip was a great way to get the audience pumped up.

The Chicago Boyz show consisted of hard-to-believe tricks including jumping over high and wide objects, followed by human pyramids and freestyle moves unique to each of the performers.

Teamwork was immediately seen as a huge component within the group, so it was no surprise when the coach himself joined in on the fun.

Maxey did an unusual handstand where his arms were folded but he was able to maintain proper balance on the floor. Hughes, known as “Batman,” performed an amazing body twist in the air. Williams, also known as “Superman” for his ability to fly over high and long objects and people, performed a very fast and high twist-flip in the air. Owten, known as the “human jump rope,” combined unique flips and twists as he flew into to the air.

The Chicago Boyz did not want to keep the show’s excitement to themselves. Audience members were encouraged to participate. A father was chosen to stand in front of a trampoline while the performers flipped over him. A second part to this segment of the performance featured the youngest member of the group sitting on top of the dad while the rest of the performers jumped over them.

Toward the end of the performance, six other audience volunteers were chosen to participate. The volunteers took part in a soul train dance line, then formed a human chain. Performers jumped over the chain using the trampoline.

The crazy stunts did not stop there.

Additional volunteers were chosen to join the human chain, totaling 11 people whom the performers had to jump over.

Mario Ramos, a freshman chemistry major, was one of the volunteers who participated in The Chicago Boyz show. He was not hesitant to join in on the human chain.

“I had a great time there,” he said. “I wasn’t nervous because I’ve experienced this before at a pep rally from my previous school.”

The Chicago Boyz performance left the audience excited and provided a great program for family enjoyment.

We have a new Facebook page out, that we would love all our fans to visit and especially LIKE US on the page.

So what are you waiting for? Visit us now at…